An extraordinary collections photos of Jane Austen's family have been discovered in an old picture album bought on eBay by a history buff, offering a snapshot into the lives of the 18th century writer's nearest and dearest.

Austen, whose works including Pride and Prejudice, Sense and Sensibility and Emma are regularly cited as among the greatest novels ever written, has never been pictured herself but the remarkable discovery gives historians an unprecedented insight into the inspirations for her most famous characters.

Karen Ievers, 51, bought the tatty album online expecting it to be packed full of pictures of charming - if perfectly ordinary - 19th century aristocrats in their sprawling manors and estates.

But to her utter delight she found the collection to be photograph after photograph of Austen's family - many of whose lives mirrored those in her novels.

Experts said the value of the album 'can't be understated' and the album shows her family 'lived out, quite without meaning to, the plots of her novels'.

It was put together by Lord George Augusta Hill - an aristocrat who married two of Austen's nieces, both daughters of her older brother Edward.

The photos feature family members with stories which could have come straight out of the pages of her novels.

There is the wedding of a heroic newlywed who lost his arm to a tiger while fighting in India, just before marrying Jane's great niece. Others show Austen's nephew who scandalously eloped to marry his sister's stepdaughter.

It features her favourite niece Fanny Knight, described by the novelist as 'almost another sister', pictured decades later than any previous sketches.

The album was unknowingly discovered and brought back to its Irish home from America by Mrs Ievers who found it on eBay.

She fell in love with Irish history while researching her husband Norman's family heritage and thought she was buying a perfectly ordinary aristocratic family's album.

It was only when she started Googling the pencil-written names beneath the photos she discovered the album belonged to Austen's family.

The true identity of the nieces and nephews was only discovered in recent years.

Elated mother-of-three Mrs Ievers, from Sixmilebridge, County Clare, Ireland, said: 'It's just incredible to put a name and faces together.

'It gives us a glimpse into the lives of those closest to Jane. The photo of wedding at Chawton House is my favourite.

'The sheer amount of bridesmaids is extraordinary. You can only pick out the bride - Jane's great niece Elizabeth - because she has the largest bouquet. Chawton House - or rather a cottage on the family estate - is where she wrote in the last years of her life.

'The album is an important insight because Jane's family were so important to her, because she had no children of her own. I think the album allows us to learn more about her through her family's lives.'

Mrs Ievers got interested in family history while researching her husband's ancestry and the history of their home, Mount Ievers Court and bought the album off eBay in November. 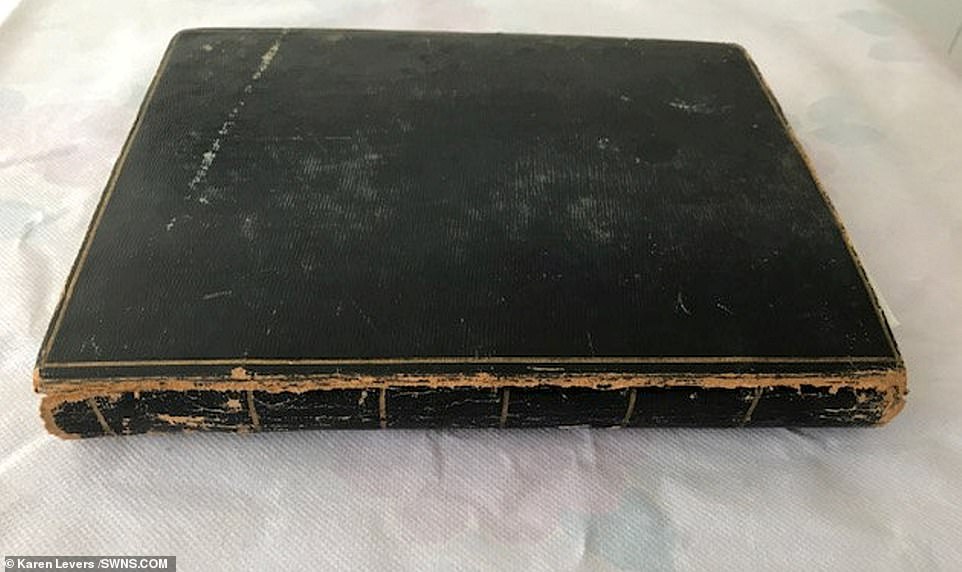 The hardbacked photo album was being advertised as belonging to Lord George Hill of Hillsborough Castle, for $2,800, but Mrs Ievers got it with an offer of $1,000.

Photography was invented in the 1830s, decades after Jane died, but the photo album shows the family and places which are said to have influenced her writing.

After purchasing, Mrs Ievers started researching the names. Mrs Ievers said: 'The pictures the American seller had posted were so beautiful.

'I was running out of stuff from the family and house to look at and I didn't want to get bored, so I started looking online for new things to research. I was searching on eBay to find old Victorian photo albums.

'I bought it thinking it would be an interesting project because it was old and related to Ireland and that was it. I - and neither did the seller I believe - know of its significance.

'It was only when I started searching the names online I thought 'wait a minute'. I couldn't believe it when I realised.'

Some of the images are found on our site